it's nice to have an athletic goal 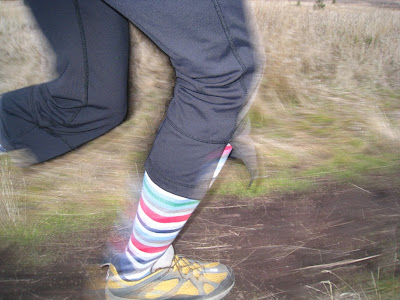 A few weeks ago some friends from my bookclub thought it would be fun to do the Snow Joke 1/2 Marathon around Seeley Lake in February... We thought we should also plan our yearly Bookclub Honey getaway that same weekend.

At first I was thinking ...gosh, I haven't done any running since, like, November, and nothing regular since before Astrid was born (early in my pregnancy), what am I thinking... In the next breath ~ about a half second later I was like, what the heck, I can do it, no problem, SIGN ME UP.

I realized I have been looking for an athletic goal (no matter how large or small)... something out on the horizon...a goal I can work toward...and train for. I thought my next athletic goal was going to be Peaks to Prairie Triathlon in April. But this has forced me to start my running, now.

I went on my first official training run a few weeks ago with Sharon (quite the running stud) and Monica (very seasoned runner, as well ~ running with a friend from work on a regular basis). The run was about 8 miles. I ran it without too much trouble...well, except for the occasional slipping on ice and choking on part of my glove. Winter running on pavement is always somewhat of a body shock from running on my trails...

That next week I ran a couple times, and then a 10 miler while we were in Washington for the weekend. It was a rollercoastery route near where Jeff's parents live on Camano Island, WA. Toward the end of the run I was feeling it in my shins...and my quads were burning on that last hill!

Last weekend four of us ran a 10 miler near my house. An 8 mile route that I run in the winter through the Fort, and then added another 2 miles in the neighborhood. I felt so wonderful after that - I just can't tell you how "on top of the world" I felt! It made my day to run with those three gals (Sharon, Monica and Britney).

I'm looking forward to Snow Joke! With a handful of recent runs under my belt, lots of hikes with my twenty-some pounder on my back (thanks Astrid) and most importantly a positive attitude. Hopefully the conditions will be super-rad/super-bad...minus 20 degrees, 12 inches of new snow, tons of ice or something. That would be even better!

I know one thing for sure - dinner is going to taste SO GOOD after that! We are going to the Double Arrow (ummm, I might have to order 2 meals!)
Posted by Ebeth

I so relate to how you feel when you are out on a hike-run-adventure without Astrid, and how it feels when she is with you. I feel like I am always trying to beat the clock when Ava is with me, I manically prepare for any catastrophe that could occur while we are out-lest I not be able to meet her needs in time! I always have a water bottle for her, snacks, diapers-and of course the good old breastests! It is nice to take a little break and be out without the babes, if you can relax yourself, but I find that I miss Ava so much that it hurts! I am going to go snow shoeing every Sunday morning for the rest of the winter-just me and my sister, Chris can stay home with Ava. I think we need some time as our selves without a heavy bundle on our backs and in our arms.

Ava does have interesting eyes, they are dark blue around the outside of the iris and then greenish gray in the middle with flecks of yellow!?! I have dark blue eyes and Chris has really green eyes, so we were curious about what color she would have. They are getting greener, wehn she was smaller they were almost totally dark blue.