You only get one life...so, get out there and LIVE!

"Life is not a journey to the grave with the intention of arriving safely in a pretty and well preserved body, but rather to skid in broadside, thoroughly used up, totally worn out, and loudly proclaiming 'WOW What a Ride!" - unknown. 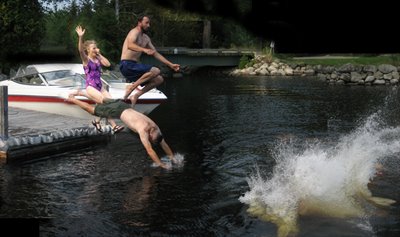 My mother and her sisters have been passing this quote around and I have to say I LOVE IT! And I truly believe it. 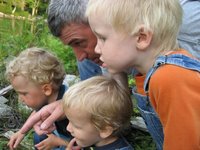 I just got back from a nearly three week trip to Maine. I thought this was an appropriate quote to start out this entry. While in Maine we drove through the night, we made sushi, we ate lobster, we chased kids around, we jumped in, we swam, we swung on a swing, we laughed, we talked, we caught up, we danced, we sang, we picked berries, we built a fire, we had smores, we found frogs, we got dizzy (rolling down a hill), we had the time of our lives! 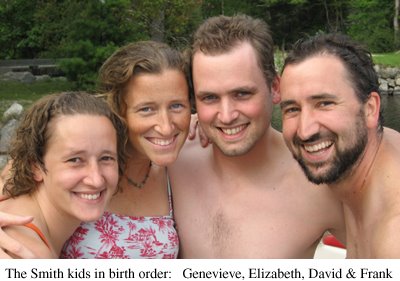 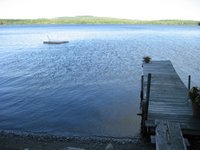 Jeff joined me for the first week of the trip. During the time he was in northern Maine we had some time to visit Grand Lake where I spent many hot summer days as a child with my family and cousins. After we went to the camp we had a home cooked family style meal at Rideouts Lodge on East Grand Lake with Grammy Folsom and Mom. 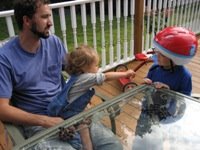 We also experienced a diaper blowout of mass proportions just after finishing our meal at the 'Sea Dog' (this cool restaurant/brewery in Brunswick) while we were with Katie and Frank for a couple days. 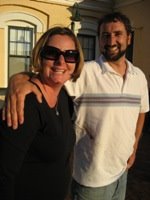 Anna and Addison had been eating blackberries all afternoon... We also got to play with Addison for endless hours on the porch and met some of the neighbors. We visited an apple orchard and visited all the local haunts in Bowdoinham where they live. 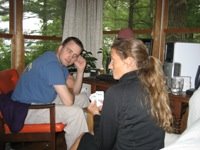 After Jeff had to leave I stayed a night at David's house right on the ocean on Cousins Island in Yarmouth. We hung out and played Five Crowns and he showed me all the cool stuff he was doing on the computer with his family videos, etc. 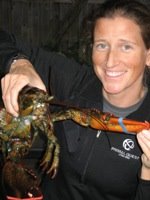 I also stayed with Genevieve, Jimmy and the kids (Samuel and William) for a couple nights. 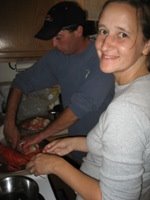 Jimmy splurged on 6 Maine Lobstahs and Genevieve and I made Maine Crab Sushi rolls. Genevieve and the boys and I were able to get out a couple of times with the stroller. One day we took the boys by their(Uncle) David's job site in Brunswick. They thought he was pretty cool with his hard hat on! 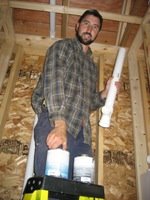 I was an assistant to Frank for an afternoon at Smith Bros. Plumbing & Heating, too! It is incredible to think of how much I experienced while I was in Maine, yet it never seems long enough. I also had time for three 10-mile runs, time with Sue and Jon, and Uncle David and Aunt Linda, time to finish a painting project with Mom in her bathroom, to go shopping for a dress for Genevieve, and to make sushi one more time with Grammy. 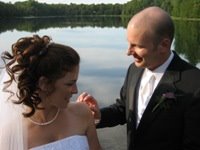 My last weekend in Maine was spent at my cousin Jamieson's wedding. Mom and I were photographers and we had a blast! He and Sharon got hitched. We had so much fun dancing and being together as a family. Weddings are such happy times but they also remind me of the people who are not there to be with us anymore (in the flesh, anyway). 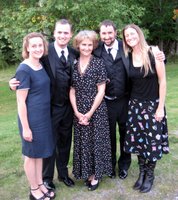 I talked with Uncle Paul during the reception and he said that he knew a man who would be glowing if he were there to dance and celebrate. He was talking about Dad. He told me that he could remember the way that Dad would move his hands and arms while he danced. I can picture him now and it makes me smile. He really WAS there and glowing really bright as we were all there together to celebrate.

As I sucked in my first breaths of smoky Montana air last night upon my return ~ I missed Maine. It is so great to be back in Missoula with Jeff - but I can't help but think of my wonderful trip... What a ride!!!

At any moment, your world can be turned upside down, and inside out. Who knows what life has in store for us... So, get out there and LIVE ~ A LOT. I sure will be!

Elizabeth...I've never heard anyone say that quote before. I finally read through your blogs and found them very interesting. I loved your visit and hope to be in better spirits on your next visit home. Love you much.