Fire in our backyard last night

Jeff and I were preparing dinner when we heard a cop car whiz by our house - followed by two game warden vehicles.... We figured an accident happened at 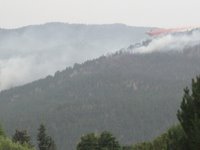 bridge less than a mile down the road - kids jumping off the bridge or something. Then we heard an announcement that there was a fire on Blue Mtn and it warned everyone to steer clear of the area. A minute after hearing this news I popped my head out the back door to see if I could see anything. Sure enough there was smoke billowing up out of a spot just below the part of Blue Mountain that burned in 2003...(Black Mountain). It looked like it was at the end of my big loop that I 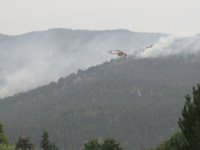 like to take when running up there (The Horse trail).

For cheap entertainment last night Jeff and I put chairs out on the back porch after dinner and watched the crews work to contain the fire. There were probably 4 or 5 helicopters with buckets. One of the helicopters was a Sikorski and 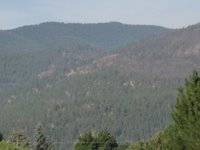 it was real fun to watch the water dump out of its belly. They would dip into the Bitterroot River - swoop over the flames and dump, then refill in the river again. There were several planes over the scene. One was probably coordinating. One was a slurry bomber.... and I'm not sure what the other ones were doing. It was pretty neat to see the coordination of the planes and helicopters to put the fires out. The last photo was taken this morning.
Posted by Ebeth