Big Fun in the Mountains! 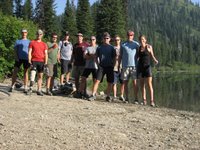 This weekend Jeff was in a golf tournament with his brother Rick so I took the opportunity to go on a monster bike ride with some friends in the mountains on the north end of the Swan Range. We clocked the mileage at just under 25mi, there was a total elevation gain of roughly 8500ft, and it took us about 8.5 hours to do the whole thing! 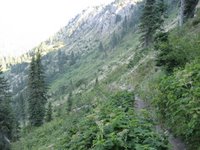 ride started out at the Strawberry Lake Trailhead. It was a somewhat steep, rocky, loose gravel, switchbacky 4 mile trail to Strawberry Lake. Once on top we kept dropping elevation just to climb back up and this routine continued for miles and miles. Sometimes we'd get amazing views that would be even more beautiful if it hadn't been smoky from an area forest fire that had started a couple days before. There were parts of the trail that were on somewhat exposed slopes and it was 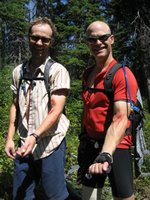 a little tricky to keep your balance on the single track. On other parts there were plants that were taller than you that would grab your bar ends every so often and throw you off balance. All of us crashed at least once - some drew blood! It was the most difficult trail I have done in our area.

The final descent to the end trailhead near Columbia Falls was 8 miles long. There were a zillion switchbacks and no rest or flat spots to rest your hands from their grip on the brakes. I had to stop about 4 times to give my fingers a stretch. The switchbacks were really tight and I walked or shuffled my bike with one foot clipped in at times. It was an amazing ride and we were all smiles once we arrived at the end to some cold beers in the cooler that Dave Ryan and Bob Long had left in the shuttle car the day before!
Posted by Ebeth
Labels: Mountain Biking